The use of specialist thermal cameras in the Oil & Gas Industry is becoming more and more cost effective and this is the same for detecting different gases in a wide variety of industries. Detection of SF6 gas is one such application. As with most applications a picture helps the end user identify the areas of concern.

SF6 gas is known as Sulfur hexafluoride, and is used in a variety of applications but it main application use is in the electrical sector as it is an excellent insulator conductor of electricity. It is used largely in electrical gas insulated switchgear substations.  The benefits of using SF6 gas in this situation is that is not affected by the effects of pollution or climate. It is a reliable gas to use over a long period of time as long as it is part of a controlled operation.

Why is it important to monitor SF6 Gases?

SF6 gas needs to be monitored for two main reasons. The first being that SF6 is highly potent greenhouse gas it has been evaluated by the intergovernmental panel on climate change to have a global warming potential of 23,900 times that of CO2 when compared over a 100-year period. Governments worldwide are bringing in stricter regulations on how SF6 gas is being used. Regulations have been brought in some countries for more constant monitoring of SF6 gas leaks and detection.

SF6 is a non-toxic gas but can cause health implications if too much is inhaled, it carries the risk of asphyxia which cause issues with oxygen being supplied to the body and cause issues such as choking and difficulty with breathing. That is why it is important to carry out regular inspections in working environments where SF6 is present to protect the employees’ health and safety.

What product from SATIR Can Detect SF6 Gases? 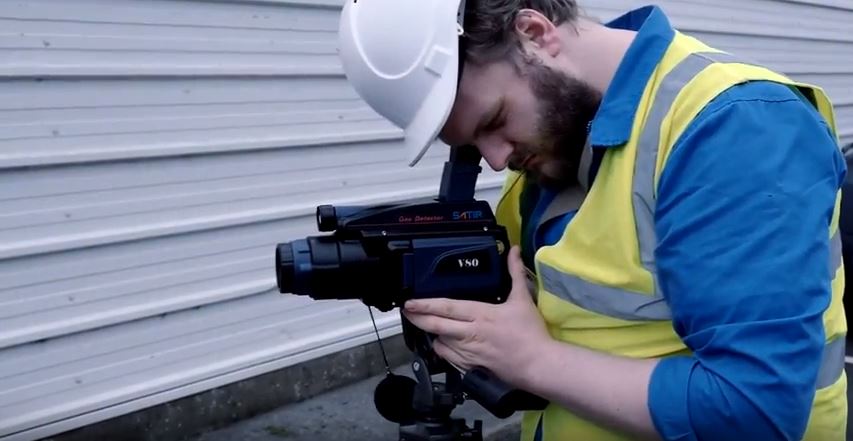 We recommend using a camera from the V-Series Range, which is a range of thermal gas detection cameras, so you are essentially getting two tools in one camera. Traditional gas detection methods such as using a gas sniffer can be time-consuming and difficult to use in some environments. With the SATIR V Series Gas detection cameras gas can be clearly detected quickly. The SATIR V Series can quickly visualise and pinpoint VOC gases leaks in industries such as petrochemical, refinery, firefighting rescues and the oil & gas industry. The V Series is a highly sensitive camera which means it will rarely miss detecting a gas leak. The camera is highly sensitive due to the sensitivity of Cooled QWIP detector when it’s temperature resolution reaches 0.025°C and leak detection sensitivity reached 0.0001 ml/s. A small temperature difference, the tiny leakage both can be detected and captured, so it won’t leave out any possible hidden danger.

For further information or to discuss any requirements you may please email info@irissytems.co.uk